*In follow up to my last post, I’m glad to share that poem which was so impactful to me.  I am not sure of the source but found that the author is D.H. Groberg.*

Quit, give up, you’re beaten,
they shout at me and plead.
There’s just too much against you now,
this time you can’t succeed

And hope refills my weakened will
as I recall that scene.
for just the thought of that short race
rejuvenates my being.

A children’s race, young boys, young men,
how I remember well
Excitement sure, but also fear
It wasn’t hard to tell

They all lined up so full of hope
each thought to win the race
or tie for first, or if not that
at least take second place

And fathers watched from off the side,
each cheering for his son.
and each boy hoped to show his dad
that he would be the one

The whistles blew, and off they went
young hearts and hopes afire.
To win, to be the hero there
was each young boys desire.

And one boy in particular
whose dad was in the crowd,
was running in the lead and thought,
my dad will be so proud.

But as they speeded down the field
across a shallow dip
the little boy who thought to win,
lost his step and slipped.

Trying hard to catch himself
his hands flew out in brace
and mid the laughter of the crowd,
he fell flat on his face.

So down he fell and with him hope,
he couldn’t win, not now.
Embarrassed, sad, he only wished
to disappear somehow.

But as he fell, his dad stood up,
and showed his anxious face,
which to the boy so clearly said;
get up and win the race.

He quickly rose, no damage done,
behind a bit that’s all,
and ran with all his might and mind
to make up for the fall.

So anxious to restore himself,
to catch up and to win,
his mind went faster than his legs,
he slipped and fell again.

He wished then he had quit before,
with only one disgrace.
I’m hopeless as a runner now,
I shouldn’t try to race.

Buy in the laughing crowd he searched,
and found his father’s face.
That steady look that said again,
get up and win the race.

So he jumped to try again,
Ten yards behind the last.
If I’m going to gain those yards,
I’ve gotta move real fast

Exerting everything he had
he regained eight or ten.
but trying so hard to catch the lead
he slipped and fell again.

Defeat! He lay there silently,
all hope had fled away
so far behind, so error prone
I can’t make it all the way

I’ve lost, so what’s the use he thought
I’ll live with the disgrace
But then, he thought about his dad
who soon, he’d have to face.

Get up, an echo sounded low,
get up and take your place.
you weren’t meant for failure here,
get up and win the race.

with borrowed will, get up it said
you haven’t lost at all
for winning is no more than this;
to rise each time you fall.

So up he rose to run once more,
and with anew commit.
He resolved that win or loose,
at least he wouldn’t quit.

three times he’d fallen, stumbling,
three times he rose again,
Now he gave it all he had
and ran as though to win.

they cheered the winning runner
as he crossed the line first place
head high, and proud and happy
no falling, no disgrace

But when the fallen youngster
crossed the line last place,
the crowd gave him the greater cheer
for finishing the race

and even though he came in last
with head bowed low, unproud,
you would have thought he won the race
to listen to the crowd

And to his dad he sadly said
I didn’t do so well.
To me you won, his father said
you rose each time you fell.

And now when things seem dark and hard
and difficult to face,
the memory of that little boy
helps me in my race.

For all of life is like that race
with ups and downs and all,
and all you have to do to win
is rise each time you fall.

quit, give up, your beaten,
they still shout in my face,
But another voice within me says,
Get up and win the race.

Therefore, since we are surrounded by such a great cloud of witnesses,
let us throw off everything that hinders and the sin that so easily entangles,
let us run with perseverance the race marked out for us.
Let us fix our eyes on Jesus, the author and perfecter of our faith.
Hebrews 12:1,2

I have just been enjoying the freedom to be outdoors that the Springtime weather has finally afforded us….  I just had to repost this article from a previous Under the Maple Tree Newsletter….

When we first moved to our “cookie-cutter” starter home – you know the one that looks the same as every other starter on the street – I was twenty-three, pregnant and a newly wed. Our yard was but an after thought in this big new world of having a whole home to love and to care for, to maintain and to pay for. Now – twelve years, and several babies, mortgage payments and home improvements later – our big little
home often seems to be bursting at the seams with so many little women living under one roof.  It was in these times that we looked out the windows and often said, “If only,” and imagined more space, more rooms, more yard.  When we took the time to think through the costs of moving in contrast to our missionary salary
and the increased effort that so much “more” would take – more cleaning, more payments, more maintaining – our hearts became content and we began to look at enlarging the space we had. Again we were disappointed with the bank balance and decided to curb our desires. 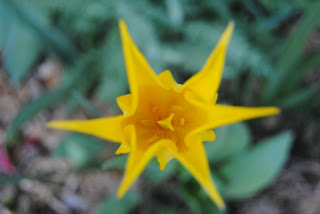 Then Spring came.
As we started to be able to spend more time comfortably out of doors we started the usual maintenance regime – trim, mow, tidy – and we found that the Lord had already started a building project for us: A new pantry filled with the freshest organic food to replace my dilapidated cupboards full of stale crackers and canned soup in the form of a garden hacked out of the overgrowth. A second laundry room equipped with a top of the line, no carbon-footprint, solar and wind powered dryer disguised as an old laundry tree
refurbished after years of neglect. For the first time, a playroom just for the kids with handmade real wood toys (climbers and swings and slides) made out of the neighbour’s old deck.  A kitchen made out of our freshly power washed deck, another neighbour’s discarded garden table and chairs and the BBQ that we received as an engagement gift which was once again painted and refurbished. A hobby room and maintenance room stood in the form of a shed cut into the hillside out of lumber that had been construction forms that a local company had been discarding.  Then there is the den, the lounging spot, with which no amount of our remodeling could compare. This space is decorated with the most exquisite artwork I will ever have – flowers perfected by the Master Gardener and Artist himself – and which adorn our humble abode as though we deserve the honour of these gifts. Despite only being about ten feet by twenty feet it sports the most spacious area on our whole property in which to lounge. All I need now is a good garage sale hammock and my second home will be complete: I’m not ready for an outdoor lavatory yet.
Though it has take us years to realize this blessing, we often teasingly call this yard of ours “The Third Floor” because we would not have done so well to have added a third floor to our humble dwelling.  We love the Lord’s idea of remodeling because not only did he make an improvement to our home but he made an improvement to our hearts. We are content.
And when we start to get complacent, upset by all the extra work of having a third floor he gently wraps his gift in a blanket of snow and puts it away until we start to yearn for more space again.

Hope that you are experiencing more fresh space at your home this week.

Categories: Art, Atmosphere, Charlotte Mason, Life, Spring
What a wonderful weekend it has been!  Of course robins are our first sign of spring – I heard them a few days before I saw them this year.  But the real sign that winter’s grip is lost is when we get to move back outside: the laundry is hung out on the line!  Yesterday was beautiful and sunny and warm.
Then today ushered in one of those miraculous moments that only comes once every few years: a great and vigorous thunderstorm that washed everything clean leaving the world a glowing green that only minutes before had been a drab brown.  An immediate transformation.  Some of the most beautiful scenes of the Great Artist’s work.
Wishing you, Dear Friends, a week of beautiful art appreciation.  There is no entrance fee to this great gallery and the Artist is the most accomplished in history.  Enjoy the spring!
Cori
Categories: Art, Atmosphere, Life, Spring